Sandstorm is an open-source platform that enables non-technical end users to install and run productivity apps on private servers. Over 70+ Apps may be downloaded from an app store and installed with one click, like installing apps on your phone.

Each app runs in it’s own secure sandbox, where it cannot interfere with other apps without permission.

We have simplified the process of setting up a cloud server so you can be up and running with a self-hosted Sandstorm private cloud server in your Amazon EC2 in a matter of minutes!

We assume you have already signed-up on our website and added atleast one set of AWS Keys to your user account.

Look for the Sandstorm-ready Ubuntu one-click EC2 launcher after sign-in.

It is important you select this version instead of the plain Ubuntu so that the correct seurity group settings can be put in place for running Sandstorm apps.

Thats all… you’re done with this step!

In the background our one-click EC2 launcher will spin-up a freshly installed Ubuntu LTS server EC2 instance from an official Ubuntu AMI with EBS storage allocated for system disks. It will also assign an AWS Elastic IP (static IP), and setup firewall rules (AWS Security Group) for all the required ports for Sandstorm. A PEM key will also be issued from AWS for SSH access and attached to the EC2 instance.

SSH into the new Ubuntu instance using an SSH client (we suggest Muon) with the SSH PEM Key downloaded from your launch history page with the SSH username displayed there.

Once signed-in to the EC2 instance via SSH you need to start Sandstorm’s installation wizard. Just download and run the installation wizard script by running one command. Copy-paste the following line into your SSH client to save time and execute it:
curl https://install.sandstorm.io | bash

The two screenshots below show the complete Sandstorm install wizard from start to finish. 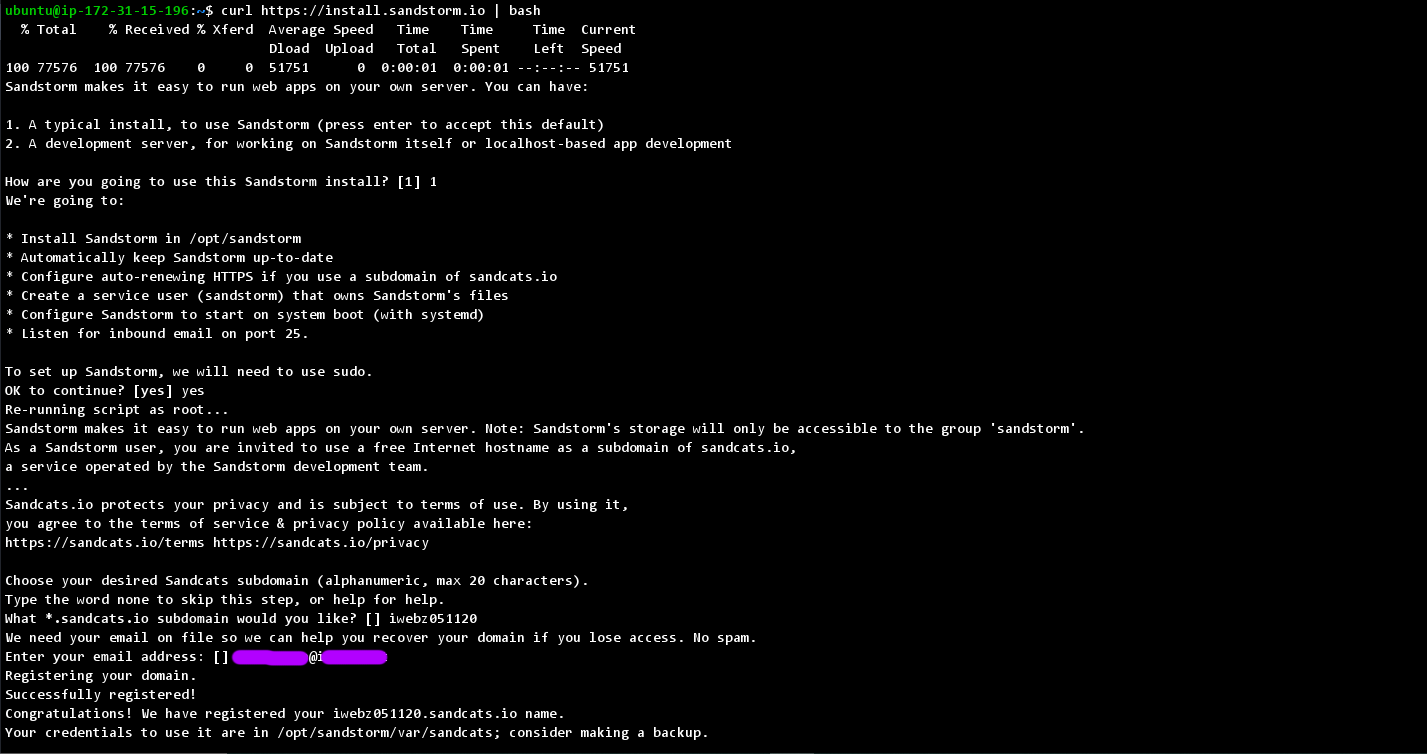 Follow the instructions and provide inputs as needed. It just takes a couple of minutes to install.

As you can see in the last screenshot above, at the end of the installation you are given an admin link to setup Sandstorm in a web browser so you can customize it to your needs. official install instructions

In this post we have seen how to quickly launch a Ubuntu server on Amazon EC2 followed by installation of Sandstorm on the server. At the end you have a working self-hosted Sandstorm personal apps platform on which you can securely run multiple instances each of 70+ productivity apps.

This may be a good place to introduce yourself and your site or include some credits.